As part of the 2018 edition of Mural Festival, our team had the chance to attend a discussion between the artist Kate Raudenbush and the Lululemon team. Invited by MURAL, Kate directed Art Blast, a sculpture placed in the middle of the Enchanted Forest for an activation produced by Lululemon Montreal. During this discussion, Kate sat in front of her artwork. In the background, a halo of colors, steel lace and play of light surrounded her. Led by Marika from Lululemon, this discussion was about moments of enlightenment that have led the artist in the creation of her artwork. Indeed, if Kate has long been an artist, first through photography, it is the strength of her inspirations that led her to sculpture. 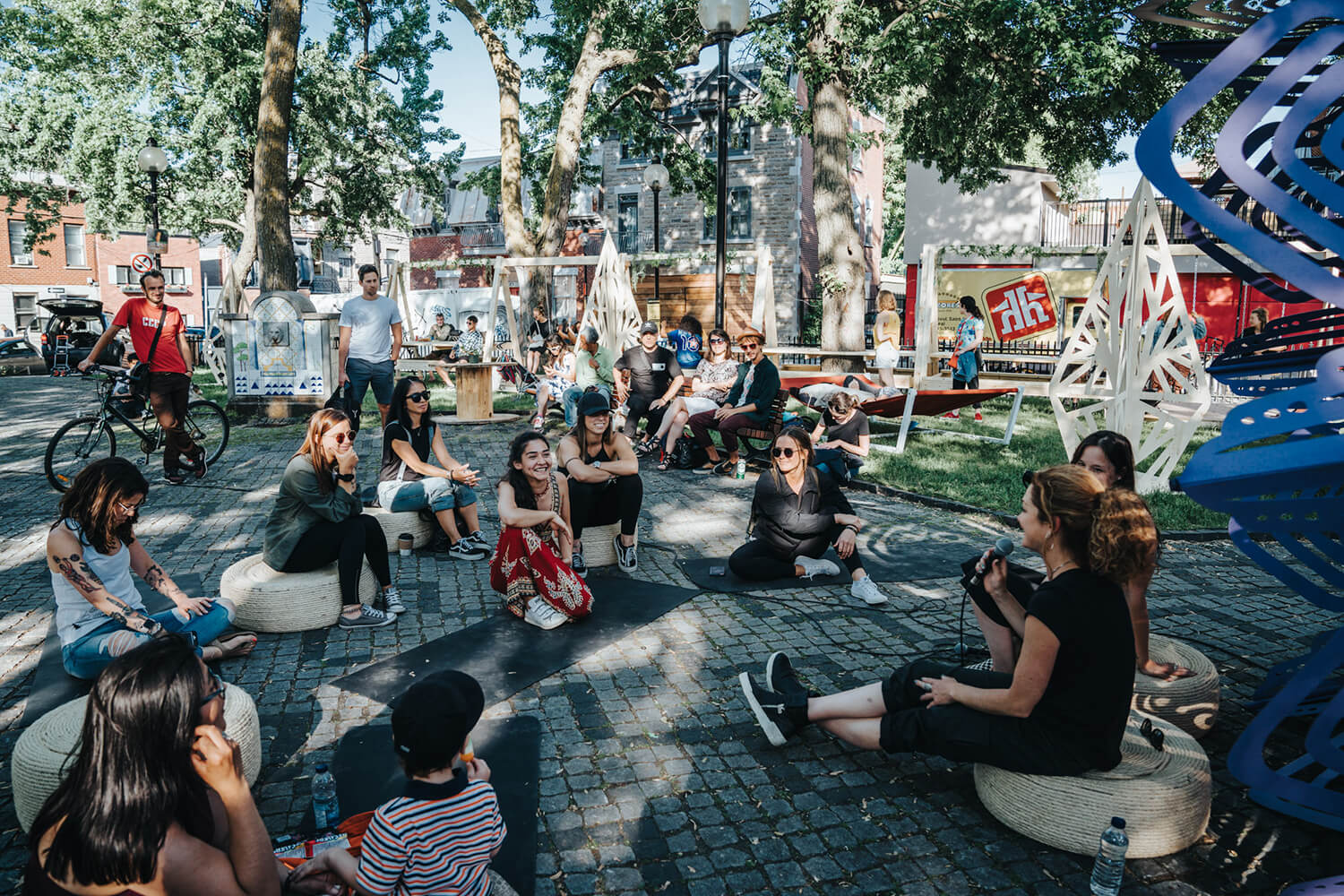 The Influence of Burning Man

Kate’s second artistic journey began following her first visit to Burning Man. This event has always been known for its special aura. Each year since 1986, a city is created from scratch by festival-goers in the desert of Nevada. Working as volunteers, they must bring all their equipment to survive for the 10 days of the festival. Money has no place there and electricity and water are rare commodities. The only thing that matters is to take care of oneself while the party continues through sandstorms. On the last evening, the festival closes with a huge bonfire, as all the art installations go up in flames.

In 1999, Kate experienced the festival for the first time. After spending 4 days at the event, she made a spontaneous decision that turned her life upside down. For five years, she enjoyed the festival behind her lens, photographing the action. After a while, taking pictures of Burning Man was no longer enough for Kate. This revelation came to her at a black party. While all festival goers wore black clothes and black lights as the only source of light, a masked man, dressed in white appeared out of nowhere and simply told her “come with me”. At that moment, Kate felt that her camera was no longer needed and dropped it to never take it back again. She made the decision that she wanted to be part of those who create an experience and no longer a part of those who only document it.

The following year, Kate presented her first sculpture at the festival. Entitled Observer’s Observer, her artwork presented itself as a large structure mounted by tinted mirrors. Festival-goers could find their passage inside the sculpture in a vault situated on the other side of the mirrors. From there, they could observe other participants.

Hearing the way Kate describes her artwork, it is obvious that it’s not only about sculpture. A yoga and meditation enthusiast, her artistic practice is also spiritual. According to her, art allows us to enter into dialogue with who we really are.

Her Debut in the World of Sculpture

When the first idea of ​​a cut steel sculpture 40 feet high came to her, Kate explained that she was only a photographer that had no clue how to build such a structure! After consulting an architect friend, he told her that if she really wanted to build this spiral, it was imperative that she learns welding. In a short amount of time she did it, showing strong tenacity. The artist elaborated on the importance of always challenging ourselves in life. According to her, this perpetual complexity allows us to continually renew ourselves. 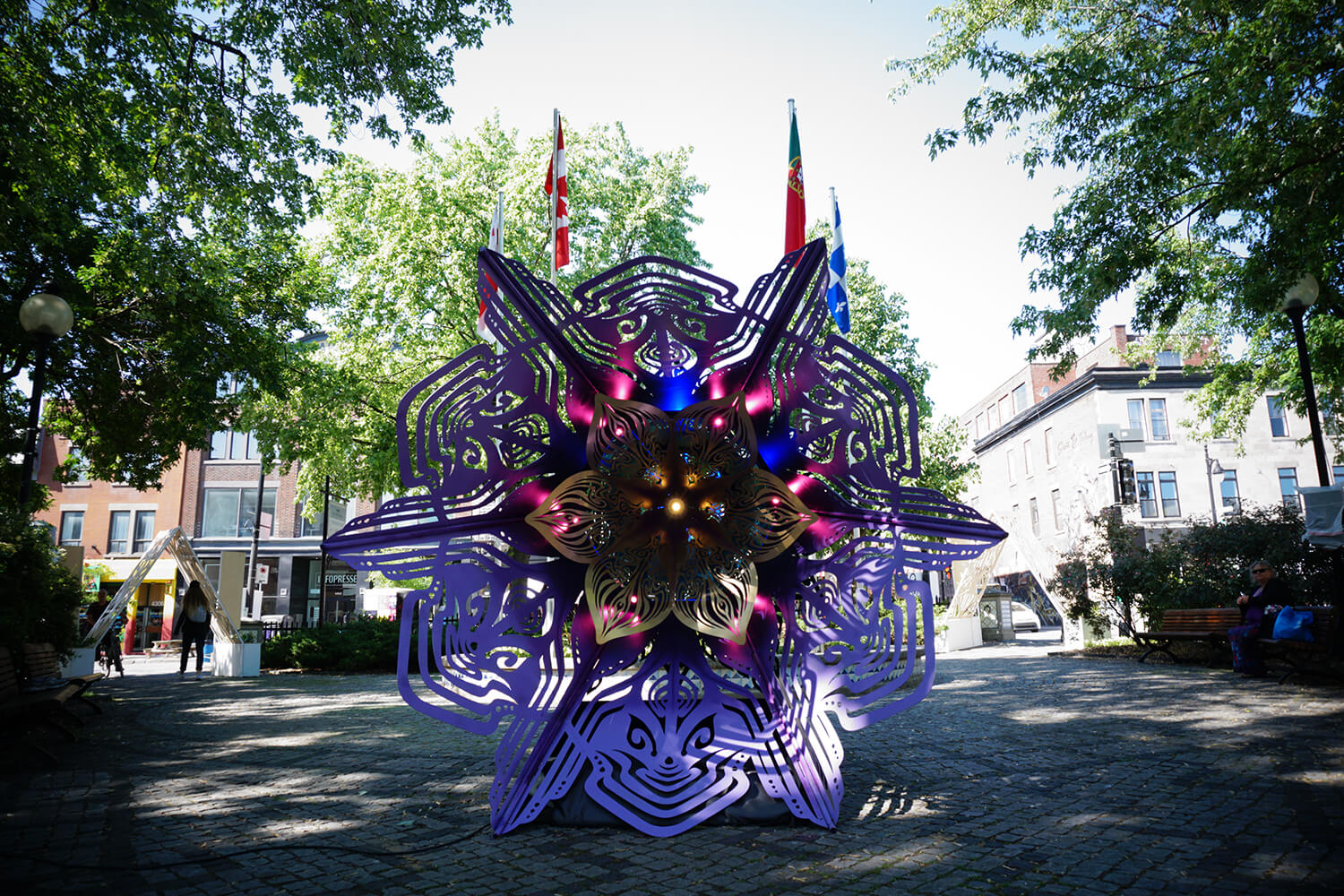 Art Blast is the result of a challenge that Kate Raudenbush took on. Indeed, she presented at MURAL, her very first artwork using painted steel. Inspired by MURAL’s street arts, Kate recreated the aerosol paint movement, as if it were possible to freeze the painting in full projection. The can of paint is based on the moving paint which is represented by 3 colored cones interlocking into each other. Made of cut steel panels, the paint fades like a lace flower. Two days before leaving for Montreal, Art Blast was still not painted! You should know that her studio is located in Brooklyn, between railroad tracks and a biergarden, so much so that graffiti is ubiquitous. While the stress began to settle into painting Art Blast, Raudenbush met an artist on the street who was trying to jump the fence to obviously tag one of the train cars. Fast as lightning, Raudenbush stopped and proposed him to paint her sculpture instead of a car, which is an illegal practice. This is how her artwork got painted the day before her departure for Montreal. It took from 10:30 am to 1:00 am with the help of the artist met on the street, named Mr. Werd who used 30 cans of Montana Gold. 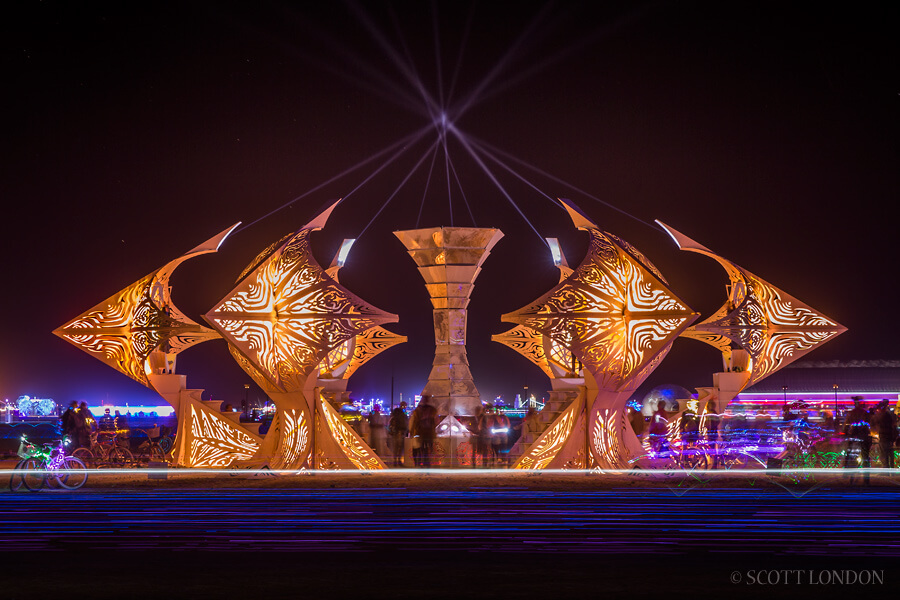 While the insertion of colors marks a next step in her artwork, the piece that Kate is most proud of is the one she herself burned with fireworks. Helios was presented at Burning Man in 2016 and it was on this occasion that Yan Cordeau, the artistic director of MURAL, discovered Kate’s work. Installed in the heart of the desert, six platforms at 12 feet from the ground formed a hexagon. In the center, the festival-goers were invited to write the elements that they wanted to illuminate in them and to deposit these words in a recipient. Following this, 6 people had to climb on the platforms and take their legs and arms apart. When the 6 people were in place at the same time, light beams were projected towards the center. At the intersection of these rays, a 7th beam rose from the recipient to get lost in the sky. Even today, Yan speaks of Helios as an unforgettable installation. Kate did not shed any tears when the installation went up in flames, it was only at the moment of inserting the fireworks in the receptacle filled with the most intimate thoughts of the participants that she was deeply moved. With great humility, Raudenbush explains that she managed to create a ritual around Helios, a true moment of meditation for those who participated. 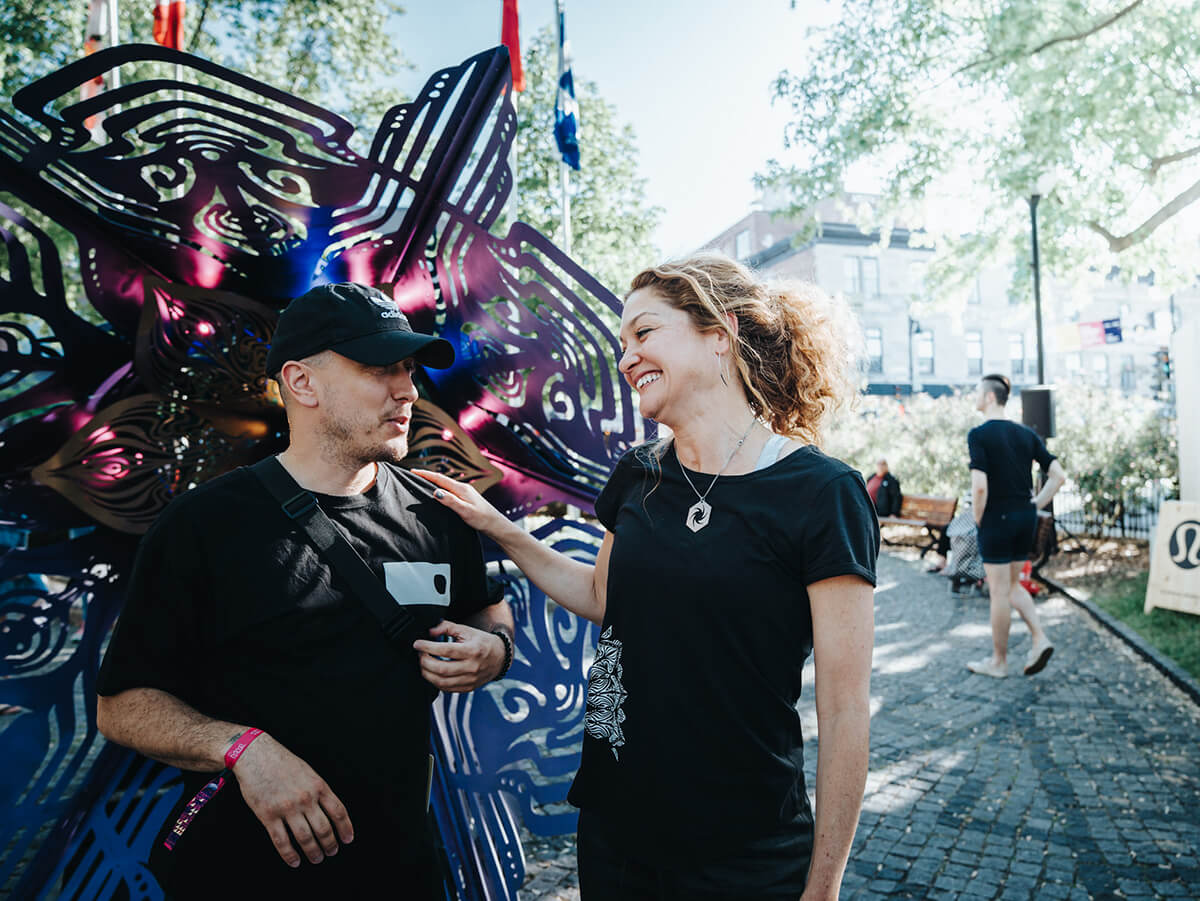 Filled with emotions, Kate told us her next project. Last April, Larry Harvery, one of the co-founders of the festival, passed away. His death brought the entire community surrounding Burning Man into deep mourning. For the 2018 edition, Kate will present an installation in honor of her friend and mentor. Perfectly aligned with the stars, the sculpture will reproduce the magnitude of this ephemeral city out of the desert. Every day, the installation will be activated by the sunrise, symbolizing Harvey walking towards the sun. The ashes of the sculpture will obviously fly to the sky at the very end of the festival. It is an emotionally charged project for the artist who desires no less than perfection for this work.

While Kate was explaining her next installation, I wished everyone (including myself) to have the chance to experience the amplitude one of her artworks. On this Friday afternoon under the trees of the Parc du Portugal, we had a superb conversation with an inspiring artist. After this discussion that lasted over an hour, she finished by giving us a piece of advice : “Do not be afraid to be afraid”. Kate Raudenbush is an artist whose career is booming, but who has kept all her humanity and humility for our greatest happiness.

After 11 days of hardwork, here are the artworks our muralists offered to Montreal, this year.

Over the years, street art has become a way for cities to revive neighborhoods; a means for artists to express themselves in a more public spa…